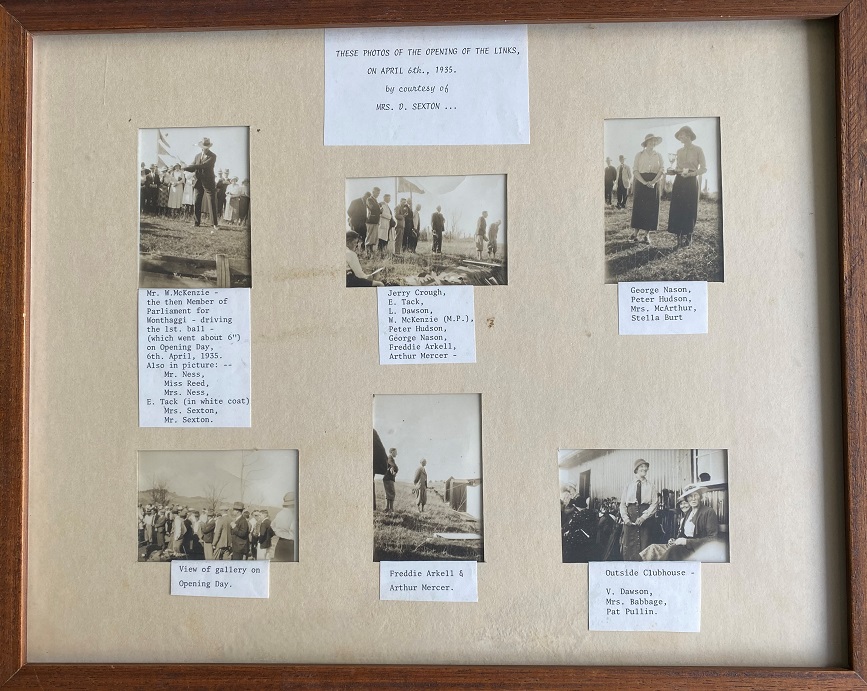 On the 14th May, 1914, a group of golfing enthusiasts met to discuss the possibility of forming a golf club in Korumburra. At that meeting a Club Committee was formed and their first task was to inspect a number of possible sites for a new links course. Having completed their inspection, the Committee decided that the Bourke Street Park (now the site of the Korumburra Tourist Park) was the best location for the Club to build its course. The Committee successfully negotiated with the Park Committee to lease part of the park to establish the golf links. By means of working bees and volunteer labour the links were prepared and opened on the 8th June, 1914, some 25 days after formation of the Club Committee. The Club had a membership of 35.

Not much is known about the Club during the period of the First World War (1914 – 1918), it appears that it went out of existence.

In 1924, Mr Dave Scott, who was the first butcher in Korumburra, approached the original Committee members and offered them the use of his land in Jumbunna Road to establish a new course. This land ran from Melville Avenue to just past the location of where the Secondary College is now situated. Mr T Adkins also let the club have the use of some land. The Committee decided to take up this offer and a new 9 hole course was laid out. The 9 hole course was officially opened on the 26th July, 1924. The 9 hole course served the club for many years, but over the years it became apparent that a bigger course was needed.

The 5th October, 1933, was one of the most important dates in the history of the Club. At an extraordinary meeting, the members decided to secure an area of land to develop an 18 Hole Golf Course. A sub committee was formed to negotiate with the Water Trust to secure a 25 year lease for an area of some 90 acres surrounding the reservoir. This site would become what is now the home of the Korumburra Golf Club. Mr Clem Enderby, a golf architect was brought down to supervise the design of the new course. After several months of hard toil, enough land had been cleared and prepared to open nine holes. On the 6th April, 1935 the course was declared officially opened.

During World War 2 (1939 – 1945) it was touch and go as to whether the remaining 9 holes would be completed. With the help and co-operation of members and a new committee the 18 hole course was completed and played on for the first time of the 7th April, 1956. In the years that followed, with the financial support of its members, a new club house was built which was officially opened on the 20th June.
From a foetus start at the commencement of the century, the club now proudly entertains a membership of around 300, has a modern licensed premises and attracts numerous visitors to one of the most scenic 18 hole golf courses in Victoria.
Information has been sourced from History of the Shire of Korumburra as compiled by R. T. Newton and news article printed in the Korumburra Times, 11th April, 195